So we built a pizza oven.

The base is 180cm across. Inside the dome it’s 130cm in diameter (51 inches for the unmetricated). This means we can use it to make giant pizzas, slow cook an entire lamb or hide in it during games of outdoor sardines. 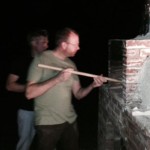 Now all that remains is the final insulating layer and some paint and some tiles.

Here’s one we took earlier though when the dome had just been completed:

← There was a Whale
The summer hasn’t even started yet. →
Having a ball! #coliving #coworking #colivingspace

Got our (winter) cocktail groove on. #slightlylate

We love this time of year. #omgsunsets

The slip-n-slide (formerly known as "Cambridgeshir

Only 3 years late. Catch-up down the #slipnslide .